A Story of Letting Go and Embracing the Future

The festive season is an annual celebration period that holds a unique meaning to each human being. To me personally, this season is an opportunity to reflect on the past year, to let go of that which no longer serves me, and to create a preferred future – intentionally. I struggle with goodbye’s so it is necessary for me to feel supported by the people I socialise with over this time of release to maintain my personal Wabi-Sabi.

A dear friend shared “She let go” on Insight Timer with me. The poem is followed by a guided visualisation of one standing on a beach and using one’s index finger to write in the sand what one intends to let go of. It concludes with the sound of water washing away the writing in the sand and watching the words disappear. During the visualisation, the letting go process was simplified by the narrator’s comforting voice and the sound of water washing up to the shore.

From October 2018, I made a habit of listening to the meditation and realised that letting go was not easy. There was conflict between me wanting to let go and me being terrified of allowing myself to let go. It somehow felt more safe to keep the pain that had been my companion for almost a whole year, if not longer.

Over the festive season I put the visualisation into practice on a private beach in Cape Town. The ripples in the beach sand gave me an indication of where the ocean tide reached. I chose to write in the sand what I estimated would shortly be washed back into the ocean. The energetic experience of using my finger to write in the sand became such a powerfully enjoyable practice for me that I wrote more than intended. What ended up being the uncomfortable part was waiting for the water to wash away my words and wash over my feet as was supposed to happen according to the visualisation. Frustratingly, this did not happen as soon as I expected!

The difficult part was standing behind the words that held such significant meaning to me. Focussing on the waves, noticing their continuous inevitable movement helped me to reach an experience of what acceptance meant. I could finally relax into what was happening rather than what I thought should happen.

In that moment, instead of focussing anxiously on the foreboding emptiness, I realised how powerful an opportunity releasing something is. Without letting go I would be unable to welcome in something new. Additional thoughts about letting go came to mind and I decided to write more messages close to my original message. As I became consumed in writing these thoughts, I unwittingly noticed that the water had washed away my first message. I had even partly forgot about what I had written in it – further easing and fuelling my process of letting go.

Over the next couple of days letting go became as easy as writing a message in the sand and walking away, intrinsically knowing and trusting that the ocean would wash it away. That relief felt tremendous… On New Year’s Day I instead wrote my intentions for the New Year in that beach sand. The overall theme emerging from this practice was that it became an act of compassion toward myself, cherishing myself and my process as I would a dear friend.

This exercise challenged me to balance what I do for myself compared to what I do for others. Moreover, keeping promises I make to myself and following through with them. I confidently declare in this blogpost that I promise to learn to speak Italian and intend to go to Italy in Spring. This is how I integrated Wabi-Sabi during this festive season. Stay tuned as I share what fuelled my desire to go to Italy with you in the coming months.

I remember having my first deep cleanse facial treatment when I was 14 years old. 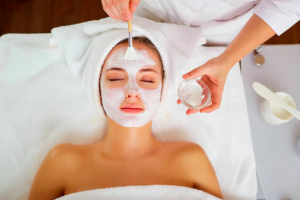 I completely fell in love with the experience.
Feeling like my acne was the centre of attention I went in self-conscious and very anxious.  That was swiftly transformed as the therapist abundantly lathered her hands with a cleansing milk and enveloped my face in the nourishing elixir.  I breathed a huge sigh of relief as I was immersed in the tranquillity of the moment. With a big smile on my face, the delight was palpable as I surrendered, trusting fully in the process. Ever since that day, I wanted to be a Somatologist, creating  an environment that would evoke a similar experience  as that facial did for me. After matriculating, I followed that  dream and trained as a Somatologist at the Adele Institute in Cape Town.  Unfortunately, at that time the earning potential for a Somatologist was low. I worked from home on a part-time basis, simultaneously taking on full-time employment as a legal secretary at a prestigious law firm in Cape Town.

I advanced my massage-training on a regular basis and  developed a passion for therapeutic body work.  In 2000 I started working as a freelance massage therapist at the Cape Grace Hotel, and a few years later I set up their Spa. I created a unique treatment menu in line with the Cape Grace brand.  This incorporated local elements and evoked rituals from the traditional African roots which honour ancient processes of healing for these people.

Over time, I identified a common request from the Spa guests to “Fix me!” Both physical and emotional fatigue was evident in their bodies, caused by prolonged stress. My standard response to these guests highlighted that I could not fix them within a week, ongoing care throughout the year was necessary.  This inspired me to establish Creative Touch.

Creative Touch is my business.  Our  team of therapists provide each employee at various corporate companies in Cape Town a 20-minute massage at the person’s workstation or designated area.  This massage is more than just a sequence of techniques that manipulate the soft tissue of another using the hands. It is a completely integrative approach to each individual’s wellbeing.

Touch is our first experience of trust.  Moreover, when touch is experienced in a safe environment with healthy boundaries in place, healing awaits both the giver and the receiver on various levels.

At Creative Touch we understand that pain is an element of human existence.  We respect the pain of another and know how to just “be” for healing to take place.  Whilst mindful of their own pain, our specialised therapists are able to provide the optimum environment for such synergistic healing to occur without demanding a knowledge of any finer details. True “Wabi-Sabi” in action.

For more info on these curated experiences have a look at these articles:

If you would like a curated treatment for your spa or venue, you may contact me personally:  rosalia@creativetouch.co.za